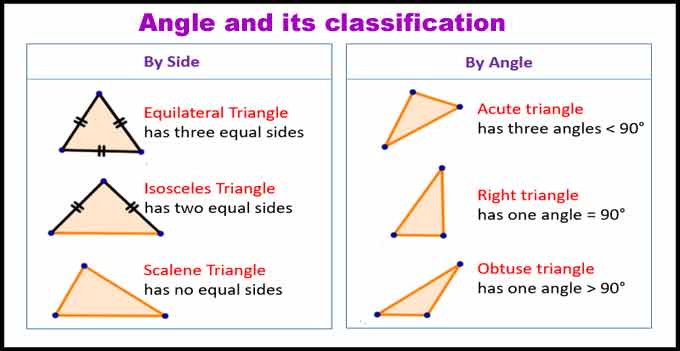 The angle is a Geometrical figure formed by two Rays sharing a common endpoint.

The Pictorial Representation of an Angle is

Point Q is called the Vertex of the Angle

Ray QP and Ray QR are called the Arms of the angle.

There are two way to write the Name of an angle

(Kindly note, while writing the name of angles within three points, the Vertex must be written with the two other alphabets and it will be a good practice to write the name of angle by using three Capital Letters of the English Alphabets. This will help to avoid confusion in complex Geometrical Figures of Angles related)

The Measurement of angle can be done with the help of Geometrical Instrument known as Protractor.

On the basis of Measurement, Angles are classified into following categories mentioned as under:

In Zero Angle, one Ray QP overlaps on another Ray QR in the same direction without any of its   rotation.

2. Acute Angle: An angle whose measure is more than 0° and less than 90° is called acute angle.

3. Obtuse Angle: An angle whose measure is more that 90° and less than 180° is called Obtuse angle.

4. Right Angle: An angle whose measure is exactly 90° is called Right Angle.

When arms of the angle formed a Right angle then each arm is said to be the perpendicular of the other arm.

So, in the above figure of Right Angle, Ray OA and Ray OB are the arms of it and so, Ray OA is Perpendicular to Ray OB and vice-versa. Symbolically, it is written as

(Like Zero Angle, both Arms of the angle overlap on each other, but in opposite direction)

It is visualized as

In complete Angle, one Ray QP overlaps on Ray QR are in the same direction after completion of its 1(one) rotation.

7. Reflex Angle: An angle whose measure is more that 180° and less than 360° is called Obtuse angle