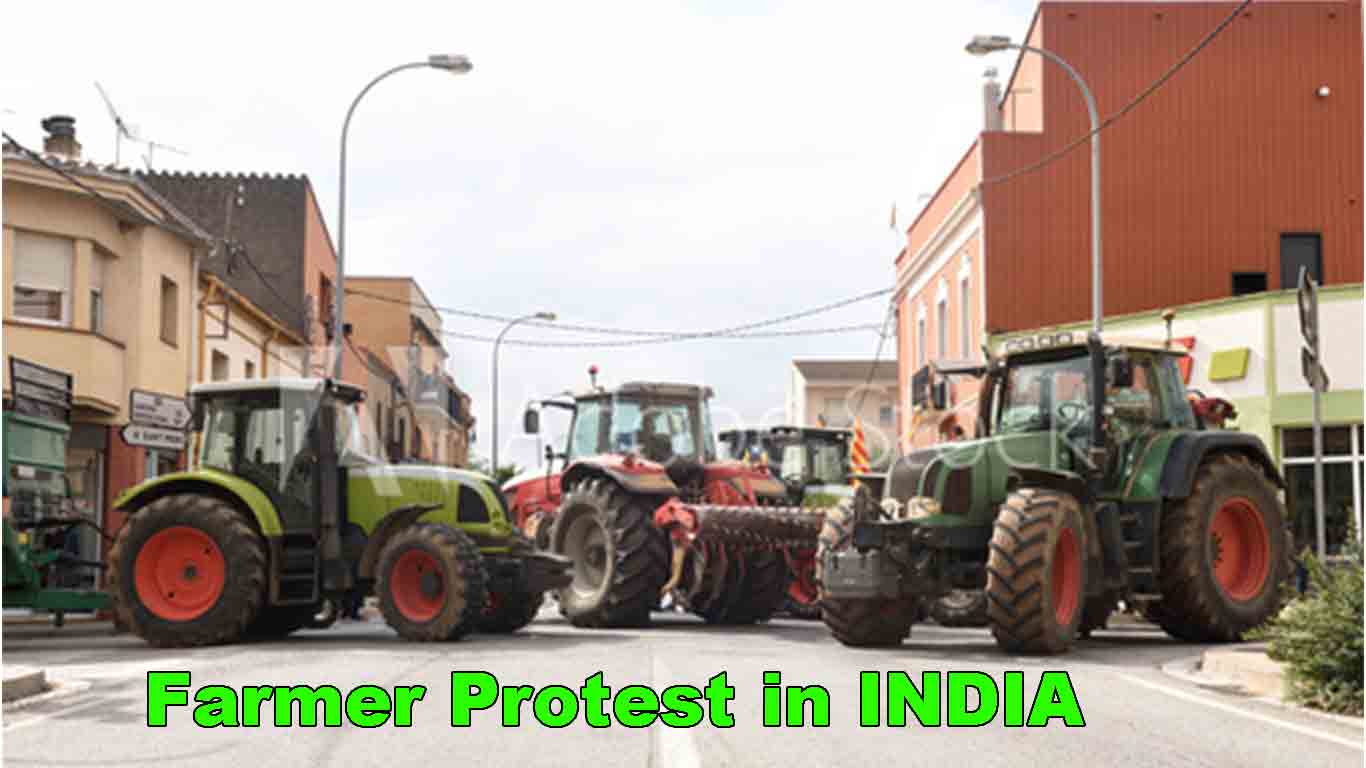 Farmers Protest In India – Agriculture is the primary sector of Indian economy. The other manufacturing and
service sectors are also directly or indirectly dependent upon the Agriculture. A large
section of our population depends on Agriculture and Krishi Mandi for their livelihoods.
Any reforms in the agriculture sector and its market will make a huge impact on a large
number of people.

The condition of poor farmers had deteriorated from the time of britishers. Although the
current government promises to double the farmers income till 2022 and started various
monetary schemes for them, the actual scenario is different.

In June 2019, the central government promulgated three ordinances regarding reforms
in the farm laws and these ordinances were passed by the parliament in
september.2020.

Earlier farmers sell their produce in a specified APMC to the wholesale buyers
through middlemen , these middlemen help the farmers to provide them a
particular price of their crops and earn their profit. APMC has various flaws in
itself, sometimes they fix the price of a commodity and cess so farmers have to
face huge losses. According to New farm laws farmers can directly sell their
crops to the institutional buyers or private players in the market, and the function
of middleman can be eliminated.

Now the farmers have agitated because the arrival of private players in the
market can eliminate the APMC in the future which is very profitable for so
many people in punjab and haryana.

Farmers want that there must be some specified rules for private mandis
too. Government has no control over private players and there are chances
that they can exploit the small and marginal farmers in the future by setting
their own rules.

MSP gives guarantee to the farmers that the
government will buy the crops from at a specific price if there is any mishappening in the market like crop wastages etc. MSP is beneficial for the farmers of Punjab and
Haryana but there are various reforms required for the proper implementation of MSP
over all crops.

In this law, farmers can sign a contract agreement earlier than production with
the private company at a fixed price and can work for them. It gives assurance to
farmers that their crops will sell out completely by the private companies and they
don’t have to worry about the market.

But the biggest problem lies in the contract farming that if the private
players will set a price for the crops it will ultimately lead to eliminating the
MSP. Farmers demand for MSP in the case of private mandis too which is
not possible because power is in the hands of private players. There can be
profit or can be loss in the future by their reforms.

The land of farmers has nothing to do with the contract farmings. Farmers
are misled that they will lose the ownership of their land.

Farmers have demanded the judicial interference in the case of dispute in
this new system so that they can get proper justice.

This act removes the restrictions of unlimited
hoarding of commodities. This can also cause problems in the future but
the main focus of farmers’ protest is regarding the first two laws.

So Farmers are protesting against these laws. The concerns of farmers are valid.
They demanded the written assurance of MSP and gave the powers to the state
government. Farmers want MSP as their legal right. They don’t want private
players in the market and asking the government to take back all the laws
instantly.

An International Conspiracy: Rihanna’s Tweet on Farmers Protests in
India

Social Media has become a new battleground for all social and political discrepancies around the world. Most of the important decisions are taken by Twitter trends nowadays. People are expressing their thoughts with their Twitter posts and they will turn into sensations in a couple of seconds. Power has transferred into the hands of celebrities who have millions of followers on social media.

That single tweet from a very famous pop star has shaken the ministry of external affairs, she gave national headlines to all the news channel, and just after her many international
celebrities like Greta Thunberg ( environmental activist), Mia khalifa, Meena harris( niece of Kamla Harris( vice president of U.S.A) has tweeted on farmer protest in India.

After their tweets, the ministry of external affairs has replied to them instantly and it has become national news in seconds. Various Indian celebrities like Akshay Kumar, Virat Kohli, Sachin Tendulkar, Kangana Ranaut, etc have also started tweeting about this topic who haven’t spoken anything before this international interference.

This international interference in our national issue has raised many questions in our mind that “Are these people actually knowing what farm bills are?? Do they know about farmers and APMC conditions in India, or is there any hidden controversy behind this? This issue has divided our country’s solidarity and unity in parts. Some people are in support of farmers protest while some are strongly opposing it. It has shaken the peace of our citizens.

News channels and journalists are completely biased in today’s media. They either manipulate the Indian citizens by favouring and appreciating every action of the government or showing disrespect or wrong side of the government actions. No media house is showing us the actual pros and cons of any scheme of the government

So one side of a particular section of our society has started propaganda that how these
international powers can talk about the internal matters of our country. But why can’t they?? Today the whole world is turning into a global hub and if Indians can talk about capitol hill violence, #black live matter issue, China’s human rights violation issue then why international celebrities can’t talk about Indian internal matters. But at the same time, republic day violence and the Khalistan touch in the farmer’s protests also shows some anti-national activities in this whole protest.

The peaceful protest has turned into great violence and so many police personnel have been injured in that. Hoisting of any other flag rather than tri-colour is the threat to the unity and integrity of our country, farmers protest in india.

Government has completely failed in explaining the advantage of the new farm laws to the
farmers and almost all the farmers are protesting against it. There are some forces who are
manipulating the poor and marginalised people about farm laws. The actual flaws of farm laws are not known by all. This is high time we need to propagate the correct information among the people and we have to stop the manipulating forces in our country.

Now there is no point that farm bills are correct and beneficial for the farmers or not, the
question is about the Human rights of protesting and having correct information about every fact in our country

1 thought on “Farmers Protest In India Why Are Farmers Agitated With New Farm Laws?”